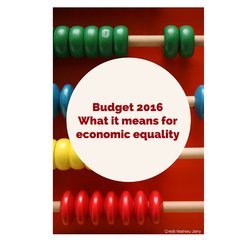 Budget 2016 was the second Budget in a row that included both tax cuts and spending increases. In the aftermath of the financial crisis and a series of Budgets that included severe cuts, this Budget is a sign of a more positive economic outlook.

Given the scale of the adjustments that have taken place, it is important as we enter a period of economic upturn that we ensure that the recovery is both equitable and sustainable. This paper is an equality analysis of Budget 2016 based on TASC’s research on economic inequality in Ireland, most notably through the first analysis of economic inequality in Ireland “Cherishing All Equally” published in February 2015.

In line with the “Equality Lens” formulated by TASC this paper analyses Budget 2016 in terms of income, wealth, public services, taxation, family, personal capacities and the cost of living.