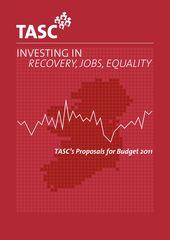 TASC this morning launched its proposals for Budget 2011.  Entitled Investing in Recovery, Jobs, Equality, the document outlines a strategy designed to reduce the deficit while creating the conditions for sustainable growth and job creation.  A PDF of the document is available here, and the Executive Summary can be downloaded here.

•Create an Economic Recovery Fund, financed from the NPRF, designed to restore economic growth and return people to employment
•Introduce new measures to increase the tax take and begin the necessary reform of our broken tax system. They include the introduction of a residential property tax and changes to tax expenditures
•Develop a multi-annual strategy designed to return the public finances to a sustainable long-term path while protecting frontline services and social transfers
•Initiate specific reforms to the budgetary process which will promote transparency and facilitate public and media analysis of budgetary strategy

“The budgetary strategy pursued over the past three years has failed. TASC’s analysis indicates that the economy is too fragile to withstand a front-loading of the fiscal adjustment in Budget 2011. We also argue that the bulk of the adjustment should fall on the taxation rather than the expenditure side.

“Compared with other European countries, Ireland’s tax take is low, it is too narrowly-based and it is unstable. TASC’s proposals – which include a residential property tax, as well as curtailment of tax expenditures and changes to CGT/CAT – are designed to begin to reform the tax system. The proposals also minimise the impact of budgetary measures on low-income families and on the frontline services on which we all depend.

“TASC is offering creative solutions to the current fiscal crisis. Our focus is on stimulating job creation (which itself will help reduce the deficit). Our solutions also seek to minimise the impact on consumer demand to prevent further stagnation within the economy, while at the same time tackling the budget deficit.

“Investment, rather than further cuts, will be key to economic recovery. TASC’s proposals constitute a three-pronged strategy to grow jobs while reducing the deficit and promoting economic equality”, Ms. Clancy concluded.