A Time for Ambition: Ensuring Prosperity Through Investment 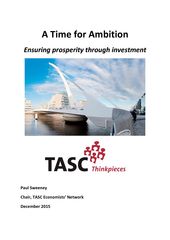 A detailed analysis by Paul Sweeney, Chair of TASC’s Economists’ Network, makes the case for substantially increased State spending to compensate for underinvestment in public infrastructure in recent years.

A Time for Ambition: Ensuring prosperity through investment, suggests Exchequer funding of €42bn in the six years to 2021 – this is €15bn more than the €27bn provided for in the government’s capital and infrastructure plan for 2016-2021 released earlier this year.

The report makes the case for a substantial increase in Exchequer investment because:

According to Mr Sweeney, the government’s plan, Building on Recovery: Infrastructure and Capital Investment, 2016-2021, will see an increase in Exchequer investment in cash terms. However, as a percentage of GDP, government investment in this vital area will actually fall in the first three years to the very low level of 2013.

It is proposed that most of the additional Exchequer investment of €15bn over that provided for in the government’s plan should be funded by some of the proceeds of the planned privatisation of the bank shares currently in public ownership.

Mr Sweeney said an IMF study on public investment found that for every €1m invested there is a rapid return of €2m. When there is a high loss of potential output, as Ireland has suffered, the returns on infrastructural investment are high.

The key institutional reforms suggested in this report include: