A Defence of Taxation: Progressive alternatives to reducing public services through tax cuts 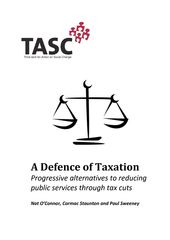 A Defence of Taxation: Progressive alternatives to reducing public services though tax cuts provides a detailed analysis of the Irish tax system, as part of TASC's research on tax policy. Taking a fresh perspective on the issue, the report's authors demonstrate that Ireland's overall tax take is too low to provide adequate public services. While some higher earners will benefit from tax cuts, everyone will lose from the resulting reduction of public services like health, education and social protection. Tax cuts will also reduce funds available for public investment in the economy, which has a vital role in sustainable economic recovery. The report offers some useful insights into how the Irish tax system really works, in contrast to the narrow focus on the 41% higher income tax rate.

The report has six recommendations: